The role of wildlife trade in transmitting emerging diseases

Photo by Maksim Shutov on Unsplash

The whole world was brought to a stand-still with the COVID-19 pandemic, which is considered as the most pivotal global health crisis of the century. Diseases  transmitted to humans via human animal interactions are called Zoonotic diseases. COVID-19 is the latest zoonotic disease that is transmitted from animals to humans. This article discusses the history and impact of how wildlife trade has contributed to increased human animal interactions, causing disease transmission, and the way forward in the wildlife trade with the lessons learnt from the current COVID-19 pandemic.

SARS (Severe Acute Respiratory Syndrome)- 2003, H1N1 in 2009, and the 2012 MERS (Middle East Respiratory Syndrome), Ebola in West Africa in 2014, Zika in 2016 and Ebola again in the Democratic Republic of Congo in 2019 are the major pandemics other than COVID-19, experienced by the human civilization in this century so far. The impacts of these global pandemics on human life are immeasurable, triggering a large number of fatalities and leading to global economic crises.

Conservationists often raise their voices against the trade of wildlife, considering the threat it brings to the wild life populations, biodiversity loss and exotic species introduction. However, the history of origin of the global pandemics of this century has divulged that wildlife trade not only challenges the integrity of ecosystems, but it can also introduce pathogens through species spillover and spread diseases from exporting regions to other parts of the world.

What is species spillover of pathogens?

Mechanism of pathogens jumping from one host species to another is known as species spillover.   Pathogens with multiple hosts are common in both plant and animal systems.  Pathogens who have multiple hosts are known as generalists. However, some of these generalist pathogens have host-specific strains.  These pathogens prefer to prevail in reservoir hosts, which can maintain a high population of pathogens by intraspecific transmission. Epidemics are created when they reach a high population in the reservoir host and then spill over to another species. A high pathogen abundance in the reservoir host causes spill over by contact with pathogen propagules from another host population.  According to recent studies, 61% of human pathogens are transmitted from animals to humans. Research suggests that pathogen spillover is the most common factor in emerging human diseases and global pandemics. These studies have described that broad pathogen host range, microbial factors and ecological contact facilitate the interspecies transmission while phylogenetic distance between species and viral traits of the pathogen also act as other decisive factors in interspecies transmission (Figure1). 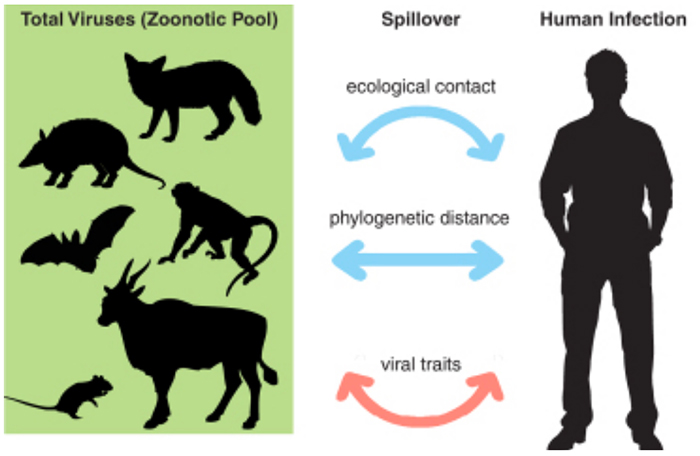 Controversial origin of COVID-19; From Bats to Pangolins to Humans?

“Somewhere in the world, someone ate a bat and now the whole world is washing hands”; This was one of the popular memes shared all over social media throughout the past few months of worldwide lockdown. Although it is now clear that no one ate a bat and got infected with the virus, the uncertainty of the first host animal species or the intermediate host, that passed it on to humans remains the same since this new infectious respiratory disease emerged in Wuhan, Hubei province in China in December 2019.  By January 2020, as the virus began to encroach onto almost all the territories of the planet, the focus of the scientists was solely drawn towards research on COVID-19.  To find out a solution for the problem, it was mandatory to first find out the origin of the problem.  Where was this virus born?  Was it created in a laboratory or was it occurring in the natural environment? Who was the initial host of this pathogen? Was it a bat or some other animal? How did the virus jump species?  Scientists are trying hard to unravel this, so that we can be better prepared to stop another wave of the pandemic or prevent the origin of a novel pandemic.

While researching on how the virus jumped species, the Malayan Pangolin (Manis javanica) came on the scene, suggesting that this animal was the intermediate host that the novel corona virus which was transmitted to humans from its original host, bat (Rhinolophus sinicus). Even though no scientist is certain about someone eating this particular bat or having an interaction with an infected Malayan Pangolin, it is well-studied that, high viral loads were present in animals sold at the Huanan Seafood Wholesale Market. This wet market is popular for selling a variety of animals, including some wildlife.

Coronaviruses are genetically classified into four major genera: Alpha-coronavirus, Beta-coronavirus, Gamma-coronavirus, and Delta-coronavirus. Alpha and Beta coronaviruses primarily infect mammals, and Gamma and Delta infect birds. A group of Chinese scientists published their research findings in the Journal of Current Biology in February 2020 discussing about the possibility of Pangolins as the intermediate host of the 2019 novel coronavirus (Figure 2). In March 2019, they took samples from 26 smuggled Pangolins intercepted by Guangdong customs of China and detected Beta-coronavirus in three of them.  These three animals were suffering from a serious respiratory disease and attempts made by the Guangdong Wildlife Rescue Center to save their lives proved unsuccessful. According to The International Union for Conservation of Nature, Malayan Pangolin is considered as the most illegally traded and most expensive mammal in the world, traded for their meat and for scales for medicinal purposes.  The molecular and phylogenetic analyses of their study revealed that the pangolin Coronaviruses (pangolin-CoV) are genetically related to both the 2019-nCoV isolated from bats and humans. Although it is not an evidence to support the fact that 2019-nCoV arose directly from the pangolin-CoV, their study suggested that pangolin is a natural host of Beta-coronavirus, with a potential to transmit the disease to humans. 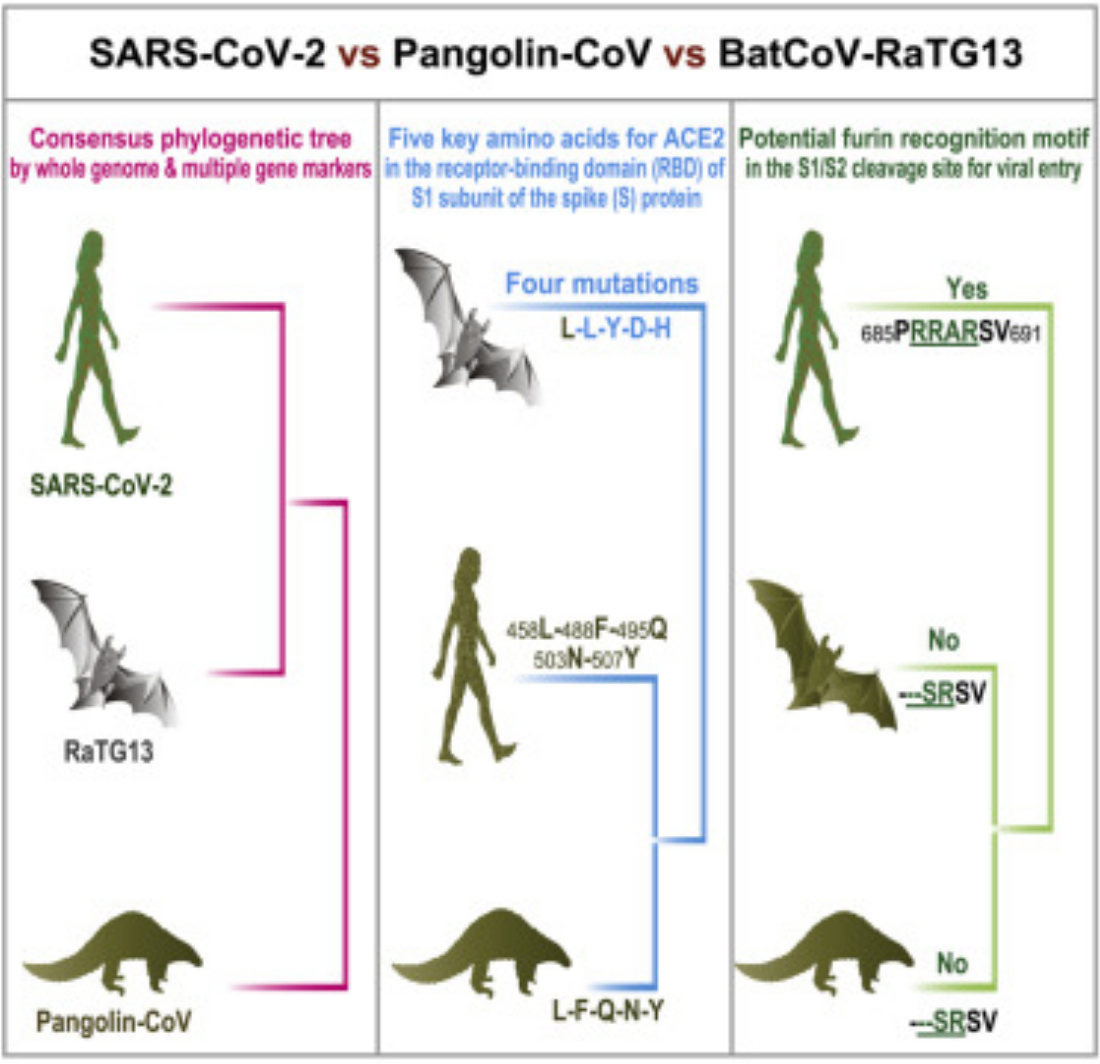 Other pandemics of this century and wildlife trade

In addition to the 2019-nCoV, Beta-coronavirus caused two other major pandemics of the century: the 2003 SARS (Severe Acute Respiratory Syndrome) and the 2012 MERS (Middle East Respiratory Syndrome) in humans. These Beta-coronavirus were also originally found in bats and species jumped to humans via intermediate hosts; palm civet cat which is a wild animal species for SARS-CoV and dromedary camels for MERS-CoV.  The local wildlife trade in China was the source of the 2003 SARS pandemic which spread to 51 countries. The first transition to humans occurred in a Chinese wet market, where the virus jumped from bats to civet cats in trade and then to humans. In 2009, the influenza A (H1N1) virus created a pandemic (also known as the Swine flu), which was transmitted to humans by swine. This pandemic caused a major down fall in the pork meat market creating an economic crisis in the meat industry. This virus was also recorded to be present in dogs, cats, turkeys, and domestic ferrets. This virus was recorded also in some wild animal species including cheetahs, skunks, and giant anteaters. The other Influenza A virus (H5N1) which caused Avian flu or commonly known as Bird flu believed to be transmitted to humans by farmed birds caused eleven outbreaks in June 2008, in five countries - China, Egypt, Indonesia, Pakistan and Vietnam. This highly pathogenic avian influenza H5N1 virus was isolated from number of bird species intercepted in trade. There are many cases reported world wide where disease infected individuals were recorded among illegally traded wild animals and a few cases are given in Table1. 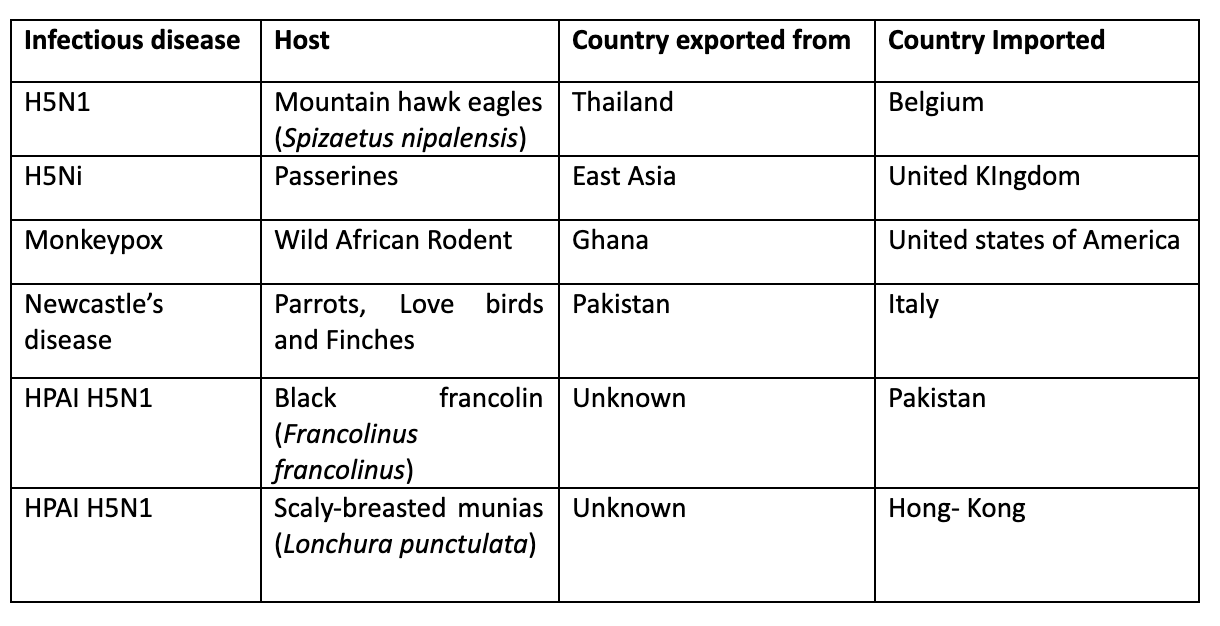 Table1: Some of the infectious diseases recorded in animals intercepted in illegal wildlife trade

Looking at the previous studies done on disease transmission through species jump, it is understood that the trade in wildlife causes multiple contacts among wildlife, domestic animals, and humans. According to an  analysis  by the New York Academy of Sciences, multiple contacts with infected animals in trade has multiplied the cross-species pathogen exchange and it has to be considered as an important risk factor in disease emergence. China is now identified as a major ‘emerging disease hotspot’ in Southeast Asia, but there is also a high risk of future diseases originating in sub-Saharan Africa, South Asia and Latin America. Differences in culture, food patterns and life styles among different nations and ethnicities also contribute to the level of interaction with wild animals and wild life trade. For instance, in Southeast Asia people seem to consume a wide variety of animals both vertebrates and invertebrates while in south Asia, cows are worshiped and in the Islamic culture any means of interaction with pigs are restricted. The superstitious beliefs in the Asian region about different medicinal benefits and bringing fortune by having some wild animals as pets (Eg: Malayan Pangolin) have increased the demand for wildlife products.
Not only the wildlife trade, but also human activities including deforestation, agricultural intensification and human encroachments into wildlife habitats has led to an exponential increase in the frequency of animal-human contact due to habitat loss for wild animals.

Scientists are now predicting that pandemics will be more frequent in the future. Dealing with the risk of future pandemics has now become a global responsibility. With globalization the threat of an emerging disease is not confined to the place of origin, but they travel rapidly and freely through our global networks, travel and trade. Various organizations such as The Convention on International Trade in Endangered Species (CITES) and TRAFFIC which is a joint project of the World Conservation Union and World-Wide Fund for Nature, work in assisting investigations of illegal trade networks, and recommend plans of action to mitigate the problems related to wildlife trafficking or trade.   However, considering the potentially significant health risks generated by the illegal trade of wildlife, the rules and regulations in trade should be revised and strict rules should be imposed to regulate the trades. All the nations should follow strict quarantine procedures to identify disease transmitting wild and pet animals in trade. Legislations alone has never been able to stop illegal trade and different efforts should be made to direct people who are involved in wildlife trade to other sources of income like agriculture and domestic businesses. If the demand for wild life products go down, people will automatically switch to other sources of income and the demand can be decreased by making the public aware about negative health impacts of interactions with wild animals.

Awareness on importance of minimizing the contact with wild animals will be helpful to reduce the risk of species spillover of diseases to humans. Food hygiene in consuming wild and farm animals has now become a major concern, as humans have now understood the consequences of getting a disease transmitted from your favorite meat dish. The adverse impacts of habitat destruction are widely studied and if necessary measures are taken to reduce habitat loss, it will eventually reduce the human animal conflicts as well as interactions. If humans learn to practice necessary physical distancing with wild animals in future, there will be no need to practice social distancing with one another, like we do now during this pandemic of COVID-19.