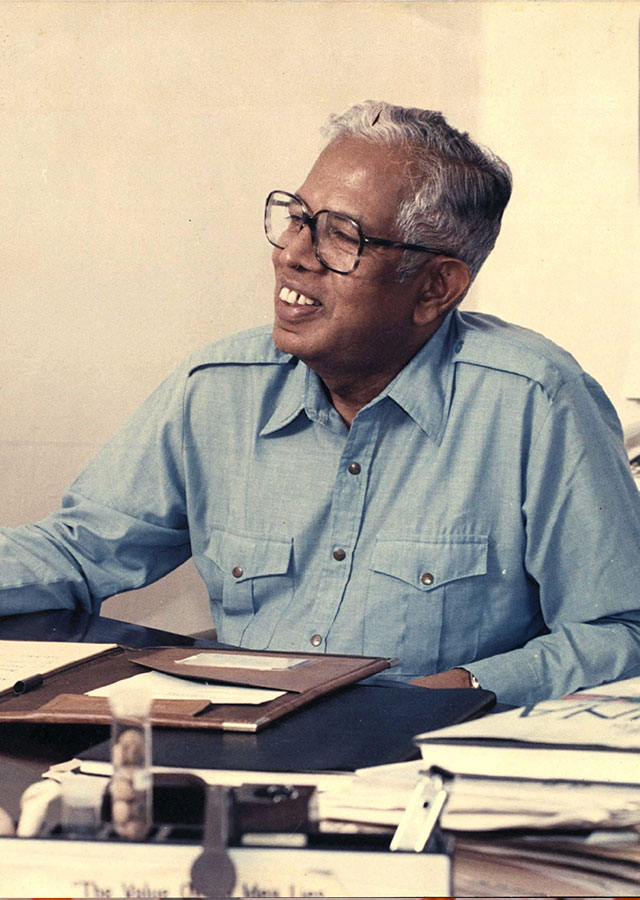 The second Director of the IFS, Professor Cyril Ponnamperuma is widely known all over the world as a leading authority on the chemical origins of life. His stance on the origins of life debate earned him a very significant place in the scientific community. He believed life was created from atoms, molecules interacting through chemical reactions.

Prof Ponnamperuma's radical ideas are not yet completely agreed upon universally. He was nominated for the Nobel prize in Chemistry for cooking up the building blocks of life (five ingredients of RNA and DNA) in his lab at Ames Research Center as well as the energy transporting molecule ATP. These were very important contributions to the field of Abiogenesis(the original evolution of life from inorganic/inanimate substances).  Prof Ponnamperuma had "no doubt at all," he said, that life could someday be created in the laboratory.

Cyril Andrew Ponnamperuma was born in Galle (in 1923), Sri Lanka. He attended St Aloysius College in Galle and later joined St Joseph’s College in Colombo.  His parents were educators and encouraged him to study philosophy after finishing his school education. He obtained his Bachelor of Arts in Philosophy in 1948 from the University of Madras, India. This is where he decided to study chemistry, setting a scientific approach to life in general. He received his B.Sc in Chemistry in 1959 from Birkbeck University, London, UK. It was in London that he started to grow curious about the origins of life. Prof Ponnamperuma, moved to the US to study for his doctorate under the guidance of Nobel laureate, Melvin Calvin at the University of California, Berkeley. He received a PhD in Chemistry in 1962.

For over a decade, Prof Ponnamperuma was the editor in chief of the scientific journal Origins of Life. It was a place for astronomers, geologists, chemists and biologists to publish their contributions on this subject. During the course of his career he published over 400 articles on chemical evolution and origins of life. His book, “Origins of Life” was published in many languages.

"Scientists are human, and they are biased as any other group. But they do have one great advantage in that science is a self-correcting process.”-Prof Ponnamperuma-

In the 1980s, Prof Ponnamperuma took an interest in promoting science in Sri Lanka. He became the scientific Advisor to President J.R.Jayawardene, who appointed him as the Director of IFS in 1984. He was instrumental in setting up the permanent home for the Institute at Hanthana after taking over a hotel. Prof Ponnamperuma was the first in Sri Lanka to organise a School Science Programme, a tradition which is still being continued at the NIFS. In the late 1980s, when the Japanese government granted 5.2 million US dollars worth equipment to the IFS, they asked whether they could also give a personal present to Prof Ponnamperuma. He said “Yes, I like presents, but can you please give us a Zen Garden for the whole institute?” The Japanese contractors brought sand and pebbles from Japan and built an exquisite Zen Garden, which used to be one of Prof Ponnamperuma's favourite locations within the Institute. Even during the height of the Marxist JVP insurgency in 1988-89, when most public institutions were forced to close, the IFS quietly continued its work, under the guidance of Prof.Ponnamperuma.

In recognition of his service to Sri Lanka, Prof Ponnamperuma was conferred, "the Honour of Vidya Jyothy" at the 1990 National Day investiture ceremony by H.E. the President Ranasinghe Premadasa. He firmly believed Sri Lanka’s path towards development was paved through science. At the age of 71(in 1994), he suffered a cardiac arrest in his office at the University of Maryland, USA. We are honoured to have this celebrated 20th Century Philosopher, Chemist and Exobiologist as a part of the history of our Institute.